The Word Up Project:
Proven to Increase Scores on State Tests

The results of a 2008-2009 independently conducted study of The Word Up Project show that middle school students who used the program for 7 months had higher scores on their state's reading tests. 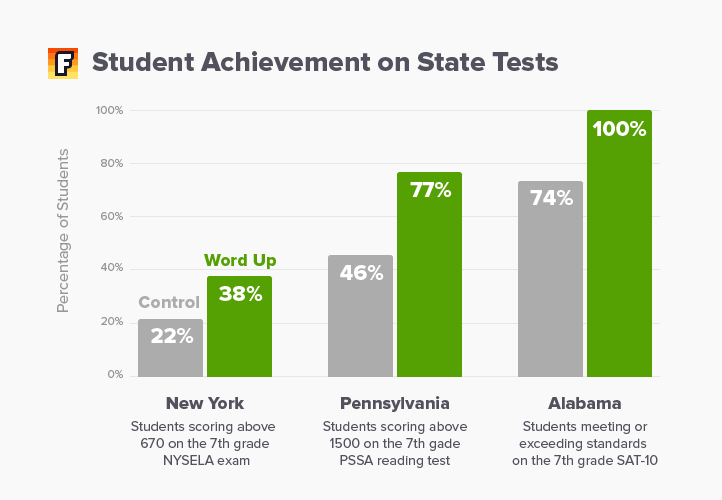 By the Educational Research Institute of America

Flocabulary, an educational publisher, contracted with the Educational Research Institute of America (ERIA) to conduct an instructional validation study of its grades 3 to 8 language arts program, THE WORD UP PROJECT, in eight school sites across the country.

The study included eight different schools in six different states Alabama, California, Massachusetts, New York, Pennsylvania and Texas. All of the students in the study were enrolled in grades 6, 7, or 8. Students began using THE WORD UP PROJECT in September of 2008 and continued until May of 2009. A pretest and posttest designed to measure vocabulary development was administered to students prior to and upon their completion of the program. In addition, student scores on each states end-of-year language arts test were provided by each school for students using THE WORD UP PROJECT, as well as for a control group in each school.

The results from eight schools provide significant evidence that students who used THE WORD UP PROJECT receive higher scores on state reading and language arts scores than students who did not use the program. The lack of adequate control groups in three of the schools limits the conclusion. However, in those five schools in which adequate control groups were provided, THE WORD UP PROJECT students scored higher in three of the schools and scored the same in the other two despite the fact that in those schools the control group seemed to be a slightly higher academic achievement group.

Raising state test scores is a difficult to achieve. These results suggest strongly that THE WORD UP PROJECT can play a significant role in raising state language arts/reading scores.

Read the full report including data for schools in Texas, New York, Pennsylvania, California, Massachusetts, and Alabama. Or read the research base of The Word Up Project to learn more about effective methods of increasing literacy. The research report is by By Roger Farr, Ed.D., Jenny Conner, Ph.D. and the Educational Research Institute of America.

Learn more about how Flocabulary programs are proven to raise state test scores.

To listen to sample songs or learn more about the program, click here.

Word Up uses a range of strategies that are effective in supporting students with vocabulary development."